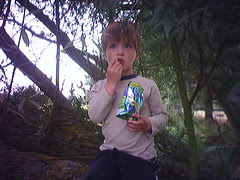 Up a tree
Originally uploaded by Jamie Pullman.
In Throop, we found a perfect tree for climbing on, with blue beetles in

Our cabbages have been covered in caterpillars for a few days now, and just like the way I was always delighted with the caterpillar outbreaks on my parents vegetables, Freddie and Katherine are captivated with the little buggers. One good thing about being infested is that we've got a couple of thrushes starting to visit the garden.
Posted by J. at 12:05 PM No comments:

I put on Don Byron's Bug Music for my children to dance around to, and found myself being roped into dancing around too. The memory it brought back was one of me and the rest of a quartet I was on a cruise ship with, along with the seediest 'violinist' you'll ever meet, Gary Lovini, doing the madness walk around a nightclub in Tahiti. It wasn't Madness playing at the time, but it seemed the thing to do, and we carried on for around 10 minutes I suppose. The Tahitians had no idea what the hell we were doing, but as far as I can remember, when we started up again, in a perilously advanced state of refreshment, quite a lot of them joined in! That's what I call cultural exchange.
I've also just remembered that we were staying in a hotel that night, as we were going home the next day, and I didn't wake up in time to get dressed properly, and left a shoe in the bedroom somewhere.
Posted by J. at 7:10 PM No comments: 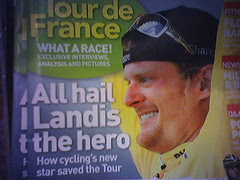 Oh dear, looks like Cycling Weekly went to press too soon.
Originally uploaded by Jamie Pullman.
Posted by J. at 12:54 PM No comments: