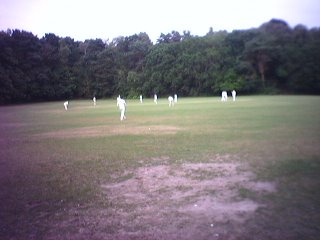 Yesterday was a momentous day. After the trauma of my last innings, a golden duck in 1987, it was important to get straight back in the middle. As our allotted 20 over against Broastine Cricket Club started to run out, I began to wonder whether I would have a chance to redeem myself, but luckily, a couple of quick wickets fell, leaving me with just the last ball to face. The ball came towards me like a guided missile, only one going at about 30 miles an hour, and I managed to scuff it away to the leg side and scramble a run. 1 not out, a triumph. We scored 125 for 5, and made quick inroads into their batsmen, reducing them to 38 for 4 of 10 overs, but then, in came two heavy hitters, who got a quick 50. I bowled a couple of overs, mostly full tosses, and one delivery that would have got a wicket if it had hit the stumps, ending with figure of 2 overs, no maidens none for 18.
In the end, they needed 20 runs from the last 2 overs, and thanks to a couple of wickets from the captain in the penultimate over, and then another couple in the last from Bomber, we won by a comfortable 6 runs.
The next match is in a couple of weeks.
Posted by J. at 9:50 AM No comments:

Well, today was supposed to be the first match of the season, and I went
and bought all the equipment. We knocked up a bit, and then decided that
as it was pouring with rain, we couldn't play. Bum. 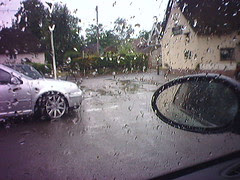 Cricket.
Originally uploaded by Jamie Pullman.
Posted by J. at 2:53 PM No comments: